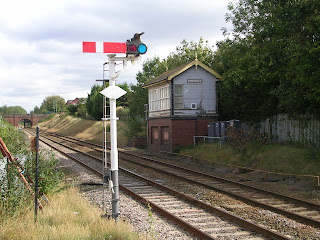 Prescot signal box is scheduled to be abolished from Monday 24 September 2012. The area - I think there are currently eight signals - will be controlled from St Helens by Track Circuit Block using axle counters.
Posted by Phil Wieland at 15:04 No comments:

As the engineering works get going, reductions in late evening trains from Liverpool are a feature of the new timetable. For example, the last train to Huyton on Mondays to Thursdays will be 21.42. Traditionally this was 23.16, and it was 23.02 in the last timetable. Buses replace the lost trains. On Fridays and Saturdays, the trains run as usual.

The posters at Lime Street seem to say these reductions are until September, while the National Rail Timetable valid until 8th December shows them throughout. Your guess is as good as mine!

The similar reductions in trains from Manchester Victoria to Liverpool introduced in the December 2011 timetable remain in force.

On the plus side, there are no weekend blockades shown.
Posted by Phil Wieland at 15:14 No comments: