Everything seemed to be running fairly smoothly this morning apart from the first train to Manchester which was cancelled due to a "diagram error", which I think means someone forgot to organise a train or a crew.

I wandered up to Huyton at lunchtime to admire the new platform 4: 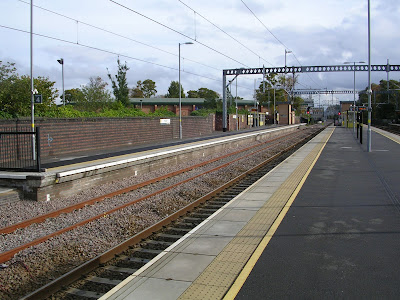 Everything seems to be finished, although a number of TSRs apply while the track beds in.


Next, off to Lime Street to see what's happening there.  There's just a single track available between Edge Hill and Lime Street, the Up Slow, and only platforms one and two at Lime Street are in use.  A new crossover has been installed between the two platforms so that trains can use the single bore "rat-hole" tunnel.  There's just room behind the two temporary signals for a four car train on each platform: 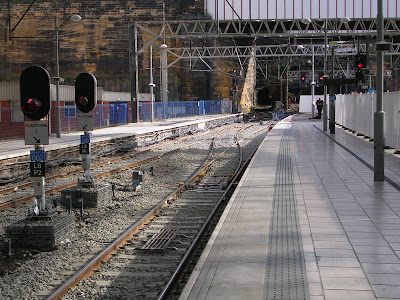 Here's a train leaving from platform two and crossing over: 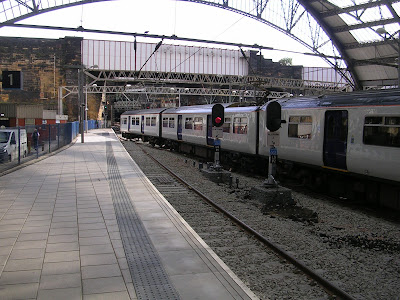 Unfortunately my train was the last movement on platform one for some time because after the above departure the signaller was unable to get point detection in the platform one position.  Everyone on the Wigan train in P1 was moved to P2, and then the service was cancelled altogether.  Eventually an orangeman arrived and cleared a few stones away from the blades, but this was no help: 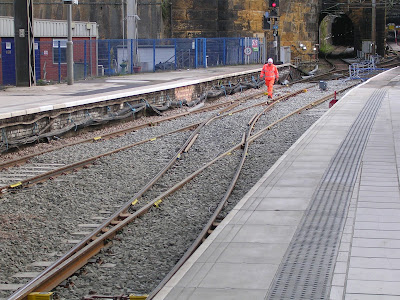 As I left on a train from platform two a further team of staff were arriving, and normal service was restored for the 13.45 departure which ran from one.

Elsewhere at Lime Street, lots of the work is hidden behind hoardings, but I could see that platform seven has no track: 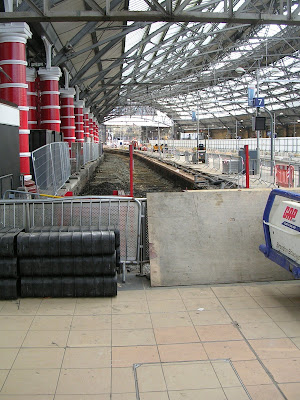 In the throat there's lots of new track, and a new ladder crossover has appeared half way along the tunnels - I think this is to be the new Crown Street Junction.  Two class 66 locos were powering works trains in the tunnels and at Edge Hill.
Posted by Phil Wieland at 17:24 No comments: