At 03:25 this morning, a very unusual time for a service disruption message, National Rail reported that there will be no trains between St Helens Central and Wigan until about 17:00 today due to an incident at Bryn.

A correspondent very kindly sent me these pictures which seem to show a collision between a couple of road-rail machines and an MPV. 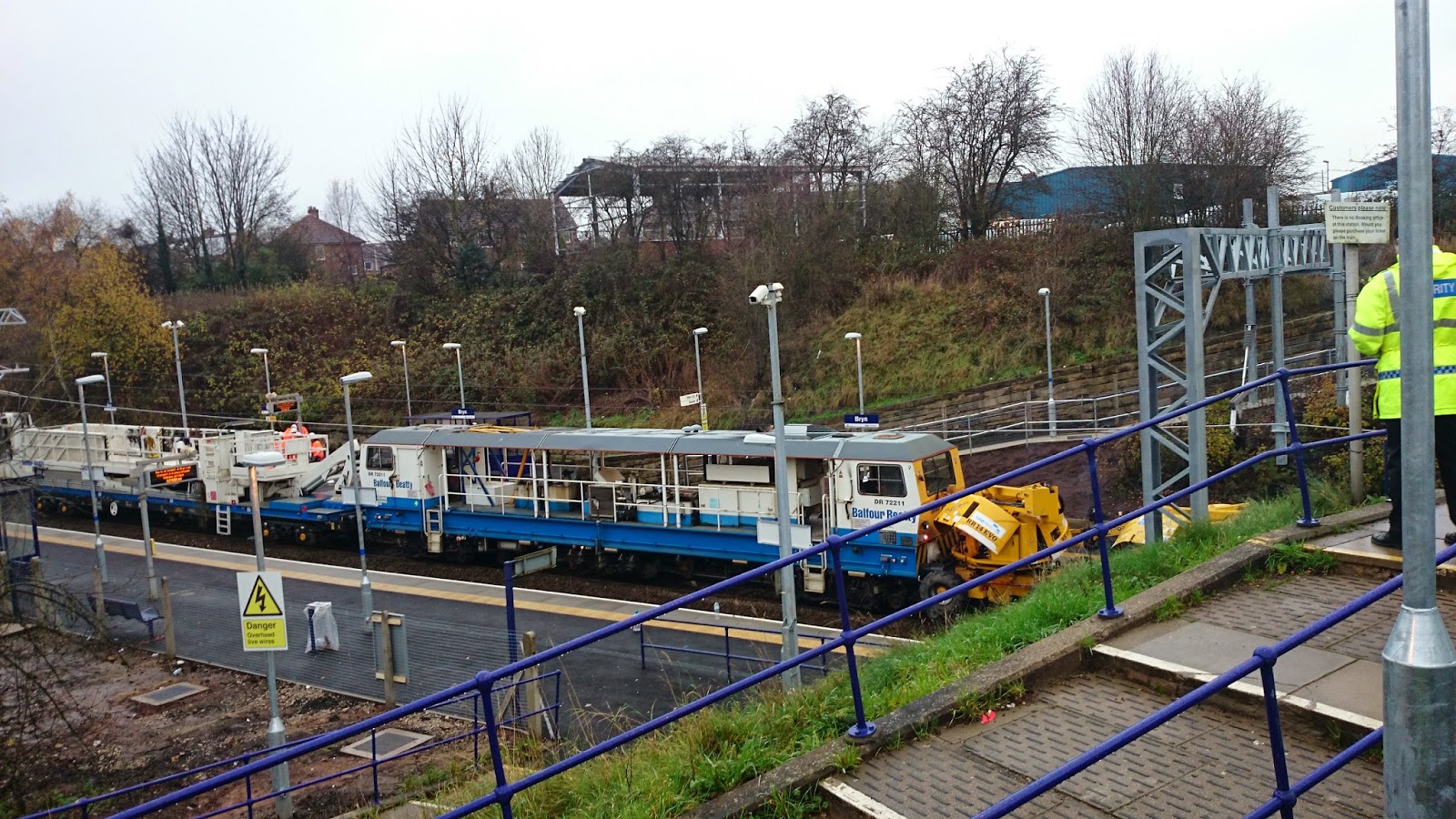 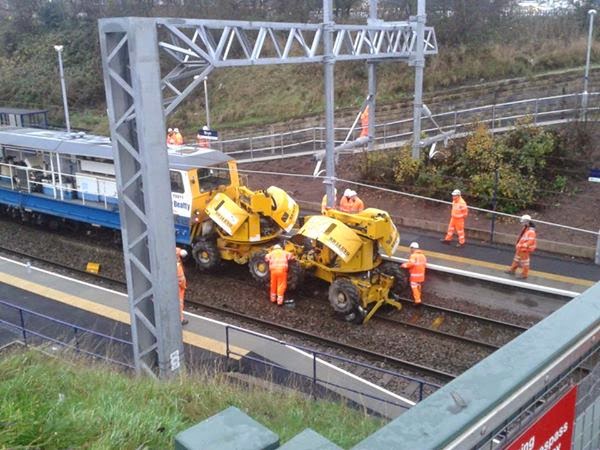 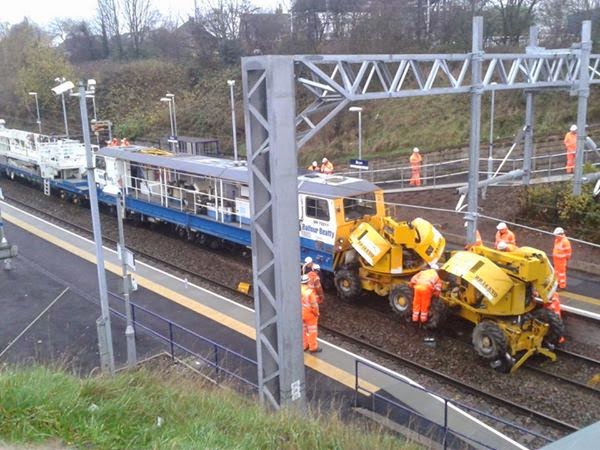 I'm pleased to say I've no reports of any injuries.

In today's download, the bustitution on Sundays to Thursdays of the last couple of trains in and out of Lime Street has been extended right through to the end of the timetable in May.

Doesn't exactly exude confidence, does it!

Posted by Phil Wieland at 07:39 No comments:

I gather there will be no trains east of Edge Hill as far as Earlestown and St Helens Central on Saturday 27 and Sunday 28 December.

As far as I am aware this has not been announced before, and at present the timetable database is still showing trains on these days.  The Merseyrail "Christmas and New Year" leaflet doesn't know about it either.

I am guessing that this is for last minute electrification works.  The fact that it has been introduced well inside the 12 week cut-off for engineering works rather suggests last-minute panic.

I wonder if what will effectively be just over a hundred hours of closure is enough to complete the work.

P.S.  I also note that bustitution until 10:00 applies for every Sunday until the end of the year.  Some of these have only been loaded into the timetable very recently.
Posted by Phil Wieland at 02:45 No comments:

Confessions Of A Project Manager

Well, the September update to Network Rail's CP5 Enhancements Delivery Plan is out at last.  Have they owned up?  Yes, sort of.

So, do we think (a) and (b), that is Edge Hill to Earlestown and Huyton to Wigan will be ready this year?  Is it going to be another 30th December job like phase 1 was?

No other future dates seem to have moved, although I was pleased to note the completion date for Phase 1 is now shown as August 2014.
Posted by Phil Wieland at 17:45 No comments: 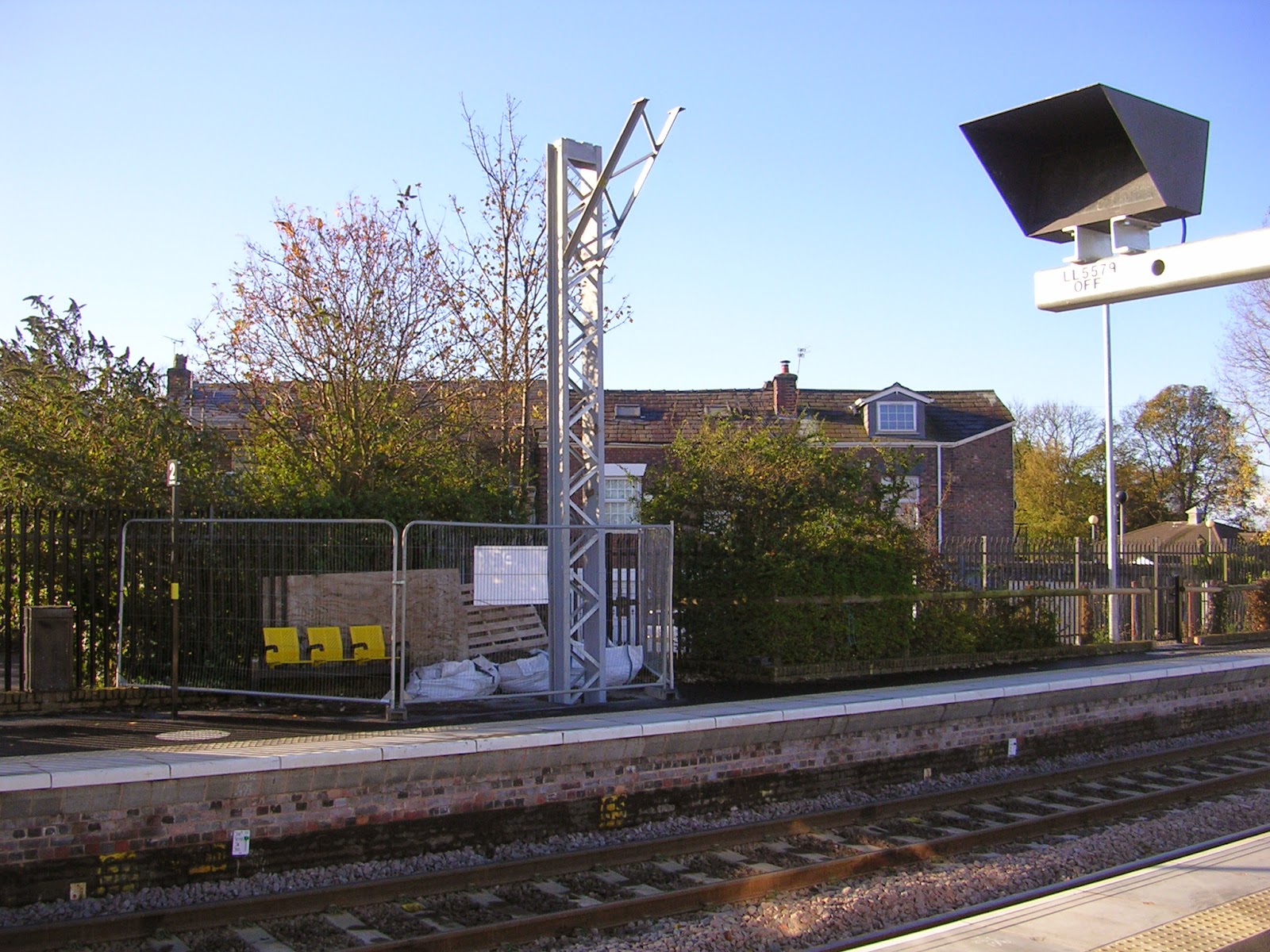 As Network Rail's silence continues, there's much conjecture as to when the first electric service will run on phase 2.  "Early 2015" seems a popular opinion.

We have known for some time that the plan is to start with the Liverpool - Manchester Airport service.  The three diagrams are, I believe, nicely self-contained, so it would be easy to infiltrate a 319 on one duty without causing complications.

But there's a snag:  Manchester Airport is closed (The station is closed, not the airport!) from 18 January to 8 February, for the commissioning of the fourth platform.  I did wonder if cutting back the service to Piccadilly might leave us with just two diagrams to try electrics on, but unfortunately the timings don't work, and as far as I can tell from the timetable database the stock on the truncated Liverpool - Piccadilly services is to interwork with Southport services during the blockade.

So how about the week commencing 9 February for a first electric run?  Could Huyton and Sankey Viaduct be finished by then?

On the other hand, maybe the Wigan line (Phase 2b) will be ready first?

It looks like the Manchester Victoria part (Phase 2c) will be last, with Network Rail trying to "move the goalposts" to April 2015.  This is certainly needed for May 2015 when TransPennine's Scotland services are scheduled to be diverted to Victoria, to avoid Ordsall Chord works.