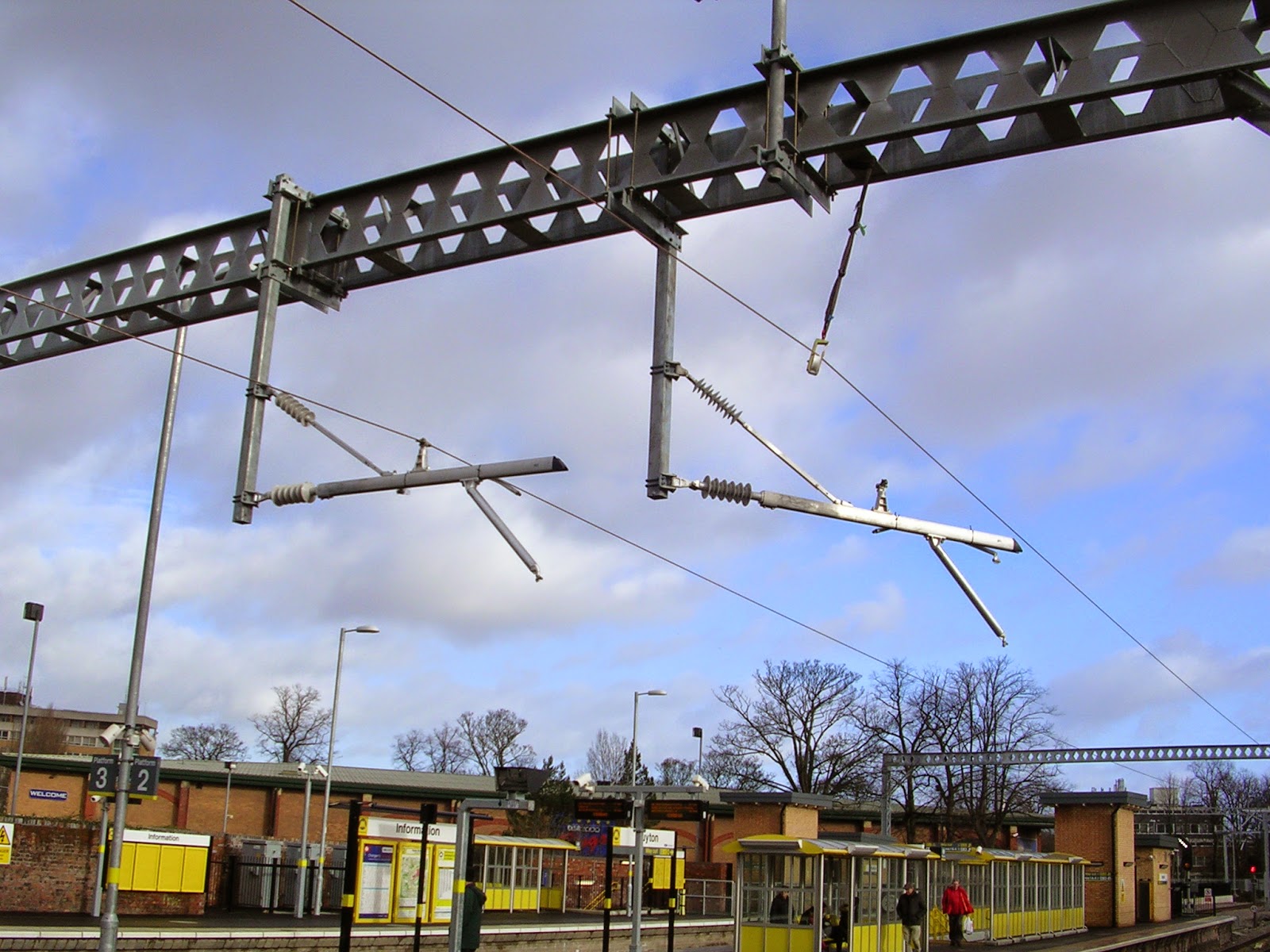 Way back in November I commented on the delays to phase two and suggested the week commencing 9 February for the first electric services, to coincide with the reopening of Manchester Airport.

As time has moved on I have thought this less and less likely, but today's news that the fourth and last portal has been erected on Sankey Viaduct, coupled with the very short notice closure this Sunday, means I can't quite rule it out yet.

There are three weekends left, could that possibly enough?  I suggest we will need to see wires up at Huyton this weekend, and probably further Sunday closures, if there is to be any chance.

Edit:  Well, it didn't take long for those comments to go out of date!  Network Rail have confirmed Sunday and Friday evening closures up until 1 March so I think we can be pretty confident there won't be an electric service until after then.
Posted by Phil Wieland at 13:51 No comments:

Further to my previous report of bustitutions on the Huyton-Wigan line, this morning's database updates show withdrawal of Liverpool-Manchester via Chat Moss services this coming Sunday, giving only two day's notice!

Liverpool - Preston services, which were to run via Newton-le-Willows, are also replaced by buses.

Update:  The notice of this change on the National Rail site (Which appeared about 17:00 today.) says it applies for six weeks.

Further update: A press release from Network rail here confirms the six week period (Until Sunday 1 March) and also adds that the bustitution of late evening trains will be expanded to include Fridays, until 27 February.
Posted by Phil Wieland at 08:10 1 comment:

Liverpool - Blackpool Service to be Curtailed ?

A news item on the Northern Rail website today (See here.) boasts of a number of schemes to provide additional capacity in Northern's services.

One item caught my eye:  "Refreshed electric trains will be rolled out on the Liverpool - Preston service in the autumn."  I'd not noticed this plan before, is it new?  Does this mean no more Liverpool - Blackpool services?  Or are they just referring to the three or four rush hour trains which run Liverpool - Preston?

The early draft of the May to December timetable currently available shows the same through service as operates currently.

I don't normally consider a Sunday engineering works closure important enough to be news here, but the fact that the closure of the Huyton - Wigan route on 18th January has only been loaded into the timetable database today suggests last minute panic.  Trains between Liverpool and Wigan and beyond are diverted to run via Newton-le-Willows.

As I write, the affected trains are showing as buses on the National Rail site as well, but the Future Engineering Work page does not list this change yet.

I suppose it's good news that things are moving on, but twelve days is not really enough notice.  Anyone using a copy of Merseytravel's paper timetable is in for a disappointment.

Update 07 January:  This morning's download applied similar changes to the following two Sundays, that is 25 Jan and 1 Feb.

Update 08 January:  I'm told a fourth Sunday, 8 February, is also affected, but this information has not reached my database yet.

Update 22 January:  Somewhat belatedly, bustitution on Sunday 8 February was added to the database today.
Posted by Phil Wieland at 20:59 No comments: