I passed through Huyton Station this morning and noted that rails are now in place on track 4, the future Up Chat Moss Slow.  The rails run from a point somewhere in the distance towards Roby (As far as I could see in the rain!) to the east end of the platform at Huyton. 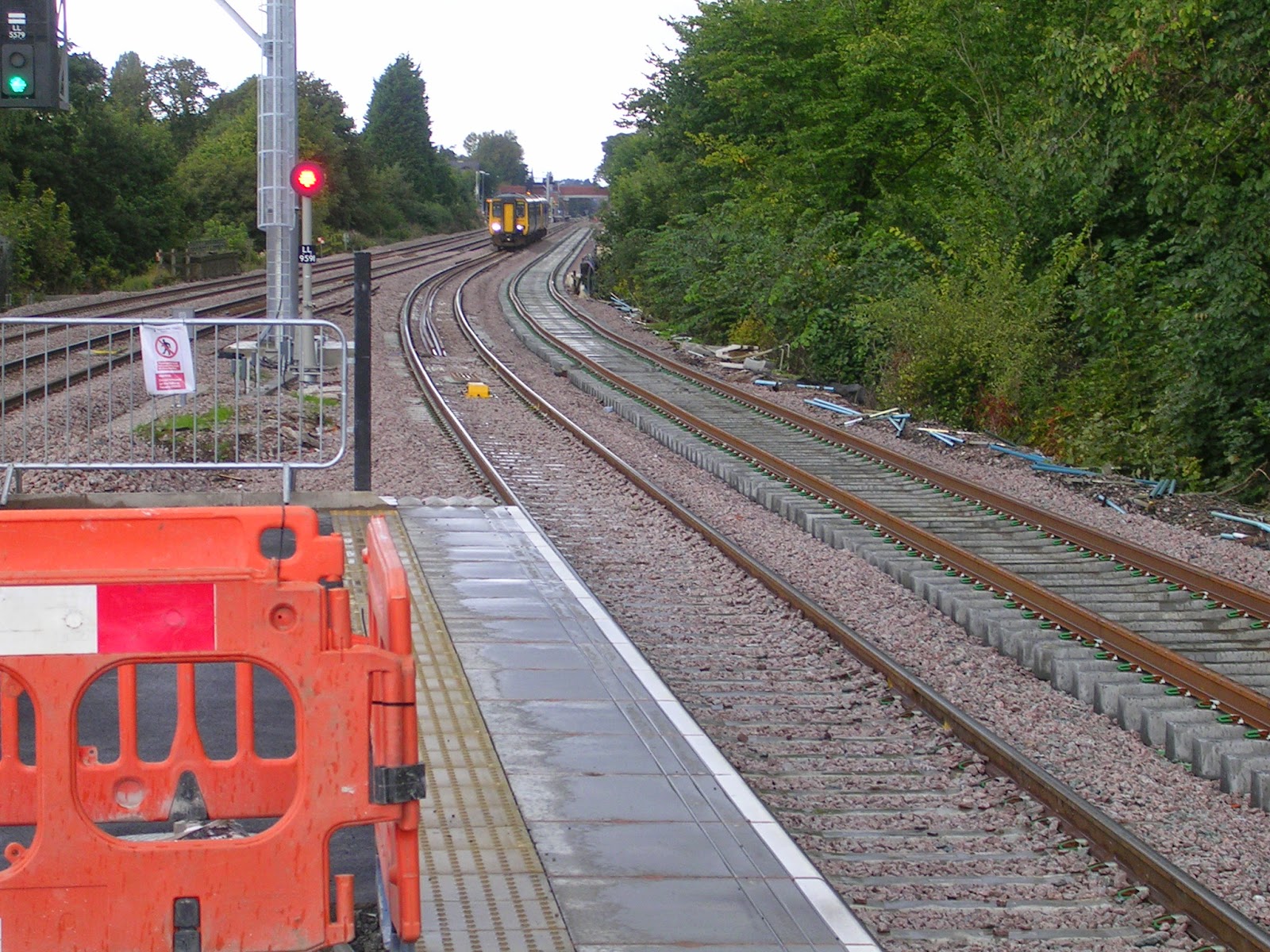 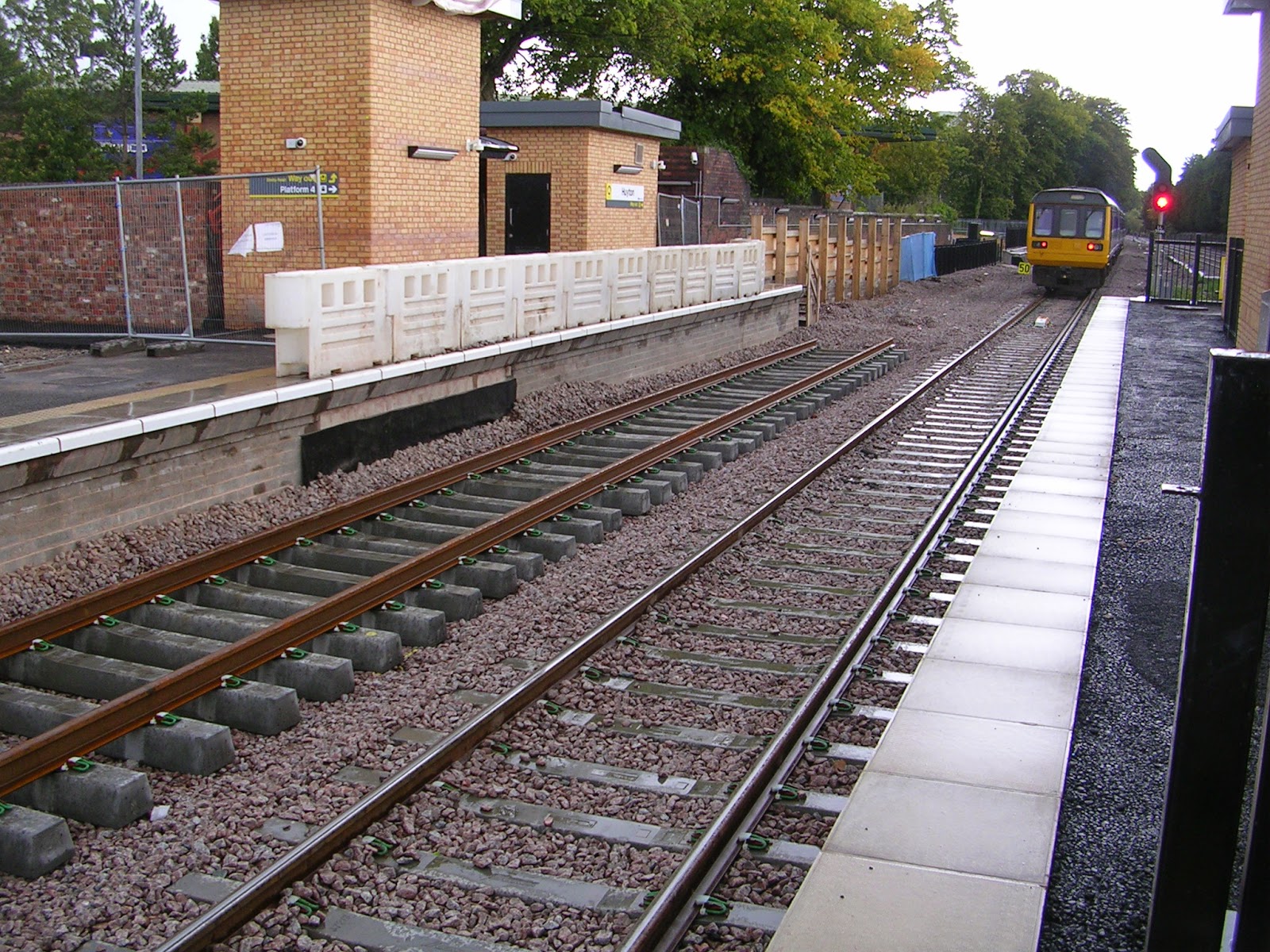 Amusingly, just west of Roby a speed limit sign for trains on the third track has been planted slap bang in the middle of the four foot!

I presume this work is being done so early because it's a lot easier messing about with cranes before the masts and wires are erected.
Posted by Phil Wieland at 10:12 2 comments:

Every Cloud Has A Silver Lining

Most of you will already have heard of the chaos yesterday morning which was announced as being due to vandalism of overhead wires at Broad Green.  I was otherwise engaged so unable to go out and about to see exactly what was happening, but I could see on the screens that the service was wrecked until about noon.

The silver lining for me was that trains were reversing down to up in Huyton platforms two and three, so examining the detailed logs from my live signalling system allowed me to learn how these uncommon moves work, and I have now been able to add the extra berths and signals to the diagram.

Admittedly, not much compensation for anyone whose journey was disrupted, but it made me happy, at least!

The signalled reversing moves available are:
I believe there's also the possibility of an UP train reversing on the Up Chat Moss east of Huyton and proceeding down into Platform 2, controlled by position light signal LL1577, but I haven't seen this happen yet.
Posted by Phil Wieland at 13:48 No comments:

I'm told a number of replacement signals have been installed at St Helens recently.  In most cases a new post and head, but at least one is a new head on the existing bracket.

As far as I am aware, these are one-for-one replacements and not a full-blown resignalling project, and the signalling continues to be controlled from the same box.  Certainly, they are still plated 'SH'.

Some readers of this blog will have already realised that I have for some time been playing with the open data which Network Rail make available.  It's about time I shared some of my results, so I though I'd offer my live signalling diagram for your entertainment.  Here's a screenshot - Not much going on at three in the morning during an engineering possession, I'm afraid.

To see for yourself, go to http://www.charlwoodhouse.co.uk/rail/livesig/1

With those points in mind, why not have a look?  Let me know how you get on.
Posted by Phil Wieland at 03:41 No comments:

Watching the live signalling today I was pleased to notice that proper overtaking moves have been programmed into the schedules.  Each hour the stopper from Wigan to Liverpool via Newton (The line through St Helens Central is closed.) uses the crossover into Huyton platform 2 and then waits while the fast Newcastle to Liverpool train behind it passes through platform 1.

So far it seems to have worked quite well.  The schedules have a seven and one half minute stand at Huyton for the stopper, to allow for a bit of late running.

The same was happening last weekend, but I hadn't got the signalling diagram fully working then.