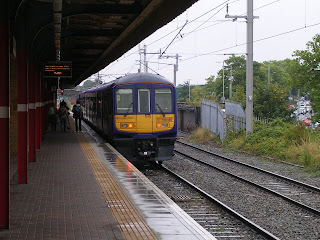 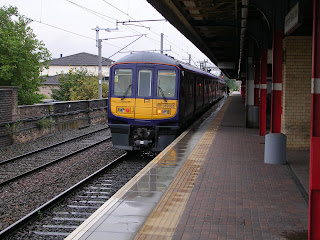 Balfour Beatty
After a couple of weeks of rumours, it was formally announced two weeks ago that Balfour Beatty were to withdraw from contracts for the remaining phases of the Northwest electrification project.

Although Network Rail have not said so, I think this can only result in further slippage of dates, as it will take some time to negotiate contracts with a new company, especially as both sides will be desirous of avoiding the failures of the previous contract.

Newspaper reports have suggested that parts of the project could join trans-Pennine electrification on the "paused" list, which some think means shelved indefinitely.

Some sources say that Balfour Beatty will continue to be responsible for the design of the electrification.  Probably a good idea, as I guess they've done most of it by now, but it could lead to a blame game between them and the new contractors if anything goes wrong later.

Probably as a result of the above, not much seems to be happening on the ground at the moment, apart from the various bridge works between Manchester and Euxton and, of course, the Farnworth Tunnel works where boring machine Fillie has set off on her run.  The rumour mill suggests Fillie's progress is behind schedule.

Watching the live departure boards, signalling diagrams and disruption reports, one gets the feeling that the new electric service on phase two is unreliable, with repeated failures of trains and overhead.  However, this does not seem to be born out by the statistics I've collected, where it is not possible to discern any significant change in the general quality of service.

So, I guess it's just that every hitch catches the eye at the moment.

I see this as good news - One would expect extra problems at the start, as staff go through a learning curve and construction errors are revealed - So I think it is reasonable to hope for small improvements over the next few months.
Posted by Phil Wieland at 10:25 1 comment: