Things are really moving at Huyton now.  The rear part of the bus station has been closed off, and behind the telephone exchange a small length of the wall has been demolished. 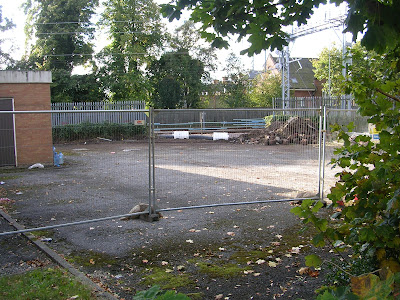 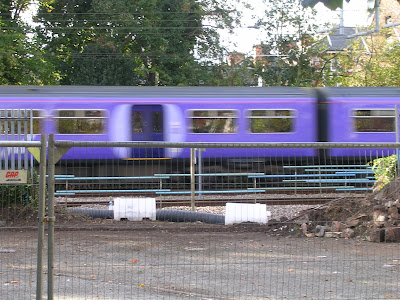 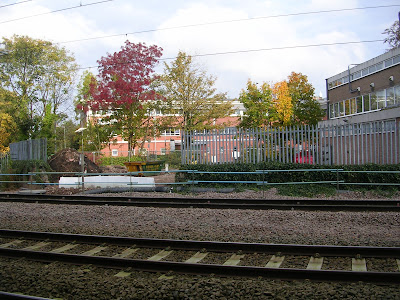 The blocks of local sandstone recovered are neatly stacked, presumably for re-cycling.  (Many old walls locally are built of the same stone, and I've dug up a couple of broken pieces from my own garden.)

According to the knowledgeable gentleman at the recent drop-in event, the closeness of the new line to the telephone exchange building will require a strong barrier in case of derailments, which I must say seems a little over the top to me.  He also advised me that the signalling and track works will be performed during a nine day closure next September.
Posted by Phil Wieland at 15:33 No comments:

In addition to the erection in Huyton Hey car park of the modern equivalent of the navies' shanty town, some real work has been started along the line:

On Tuesday the area around the telephone exchange echoed to the buzz of chainsaws and the rattle and crash of a wood-chipper, as the vegetation along the fence behind the building was cut down.  Similar work on the rail side of the fence will have to wait for an overnight possession and is currently scheduled for the night of Saturday 22 October from 22:00 until 08:00 Sunday.

Saturday night possessions between 22 October and 27 November will also be used for the installation of a "new protection structure" (Do they mean a wall?) at the telephone exchange.

There is a public drop-in event scheduled for 16:00 - 19:00 on September 29th at the Huyton Suite, for local residents affected by the work.  I might pop in to see if I can glean any more details. 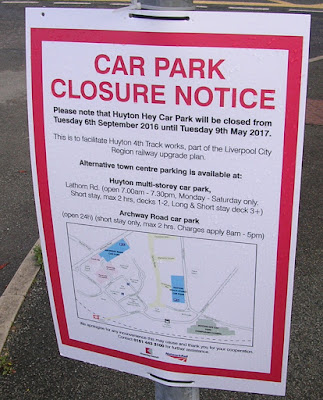 Is it that time already?  It seems like only last week I was moaning about the new timetable, and here's another one!

So, what exciting revelations did this morning's data download hold?  The answer, I'm afraid, is that the new timetable, starting on Sunday 11 December 2016, is apparently exactly the same as the current one.  Local trains are still scheduled as Class 142 diesels and there's still no sign of any electric acceleration.

One new feature of this download which I haven't seen before is that many of the schedules run through the whole timetable year, until Saturday 09 December 2017, suggesting there won't be a new timetable in May 2017 as there has been previous years.


The small print:  As I always say in posts about new timetables, the data is well outside the twelve week limit and so must be considered provisional.
Posted by Phil Wieland at 15:20 No comments:

I took a trip into Liverpool yesterday, and as the train set off something odd caught my ear.

I assume this rebranding is part of the switch to the new Arriva-run Northern - Sorry, that should read northern - franchise which takes place this Friday (1 April).

Of course, the announcements could have changed ages ago; one tends to tune them out on a regular journey.  Yesterday was the first time I noticed.
Posted by Phil Wieland at 09:57 No comments:

When I commented last week that diversions of the Liverpool to Manchester Victoria service to Oxford Road had been cancelled for Saturday 30 January, I had failed to check every train.  In fact, a number of westbound trains had been missed and were still recorded in the database as running from Oxford Road.

These errors remained in the system until Saturday morning.  For example, the 10.02 Oxford Road to Liverpool Lime Street was 'live' until 09.30 when it was cancelled.  At the same time a new train was added to the system via the VSTP (Very Short Term Planning) process, this being the 10.02 Victoria to Lime Street, which proceeded to run as normal.

I've just looked at the National Rail web site for trains next Saturday (6 February) and, once again, there's a higgledy piggledy mix of schedules with 13 starting from Victoria and 8 from Oxford Road.  I might be in Manchester that evening, hopefully the data will be updated before I set off.

So, my moan about trains being changed at 48 hours notice pales into insignificance, now they're changing with only 30 minutes notice.  If you are on the ball that's long enough to walk from Oxford Road to Victoria, but, more likely, your desired train from Oxford Road would simply be shown as cancelled, and it'd be up to you to find out what's going on.

I realise the train planners have been very busy with storm damage at various locations but really this just isn't good enough.

Update Friday 05 February:  In the schedule database download this morning the errant services were corrected and all trains have reverted to their standard schedules running to and from Manchester Victoria, tomorrow and the following Saturday.
Posted by Phil Wieland at 11:01 No comments:

Last January I grumbled about significant changes to the service with only 48 hours notice.  Well they're at it again.

Later today I'm off to Manchester.  When I planned the trip on Tuesday, the Liverpool to Manchester stopping trains were diverted from Manchester Victoria to terminate at Oxford Road instead.

This morning I went to look up times for my return trip.  That's odd, there's no service home from Oxford Road.   And my morning train runs to Victoria.  My first thought was that I'd entered the wrong date when I originally checked the train times.  However, a little research in my timetable database showed that news of the cancellation of the diversions had been delivered on Thursday morning.

Further investigation reveals that Saturday diversions to Oxford Road have been cancelled for 23rd and 30th January and 6th February, but at the time of writing remain in place on 13th February.