It's about that time of year, so I wasn't at all surprised to find that the new timetable, which starts on Sunday 13 December, had appeared in my database overnight.

When I looked into the details of the new schedules, however, I was startled and disappointed to discover that the timetable for trains at Huyton is exactly the same as the old one.  Was I wrong to expect an "electric" timetable this time?

What we have is a timetable up to 14 May 2016 in which all the trains are still timed for diesel units, running exactly the same service as they do now.

As expected, on Mondays to Saturdays Liverpool/Blackpool services are truncated at Preston, just as they will be in the current timetable from 5 October.  (A few daily peak hour trains, and all the Sunday services work through.)

For a complete change of style I wandered up to Huyton station this morning to see 45699 "Galatea" storming through with The North Wales Coast Express on its way from Liverpool Lime Street to Holyhead. 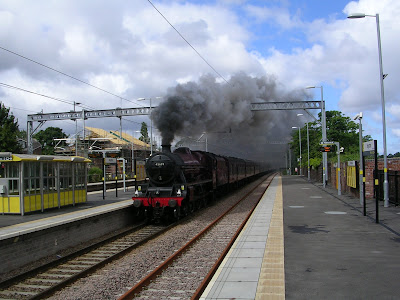 P.S. Unfortunately Galatea only made it as far as Llandudno Junction and was removed from the train there with a hot box.  The rest of the tour was diesel powered.
Posted by Phil Wieland at 11:17 No comments: