The test runs were successful on Monday night, and another test run, which included the Earlestown West curve and a run to Warrington Bank Quay, took place on Tuesday night.

The general consensus seems to be that we can expect the first passenger-carrying 319 to be the 06:16 Liverpool Lime Street to Manchester Airport on Monday 2 March.

The following services are expected to be usually worked by 319s on Mondays to Fridays up until the May timetable change, when more will be introduced:

Update:  The rumour mill now seems to think Monday is off due to last minute paperwork problems;  maybe Thursday instead?
Posted by Phil Wieland at 04:38 5 comments:

It's all happening tonight!  First a test train topped and tailed with class 37 locos ran up and down a few times, with the pantograph on the test coach up.

Then two EMU ECS workings popped into the timetable running from Allerton to Newton-le-Willows.  And two 319s ran up and down between Lime Street and Newton.
Posted by Phil Wieland at 23:46 3 comments:

New Timetable (from 17 May)

I've noticed a few comments at other places on the internet about "Electric services from May", so it might be timely to point out that we are now twelve weeks away from the timetable change and currently the new timetable is pretty much exactly the same as the old one.

So, while we can expect to have electric trains soon (My guess is March for Liverpool to Manchester Airport, April/May for Manchester Victoria, and Wigan at the same time or soon after.), they are probably going to be gradually phased in, running in diesel timings for a good few months, perhaps until December.

Of course, all this is guesswork.  I am not privy to the internal planning processes of the railway, and a new electric timetable could appear at any moment to prove me wrong, but I doubt it.

I nipped up to Huyton this morning to see the wiring team in action, a rare opportunity to observe these nocturnal creatures in daylight.

As you can see, we still have just catenary on the Down Fast and Down Slow, but since Friday's picture droppers have been added. An earth wire has also been added through Huyton Station. 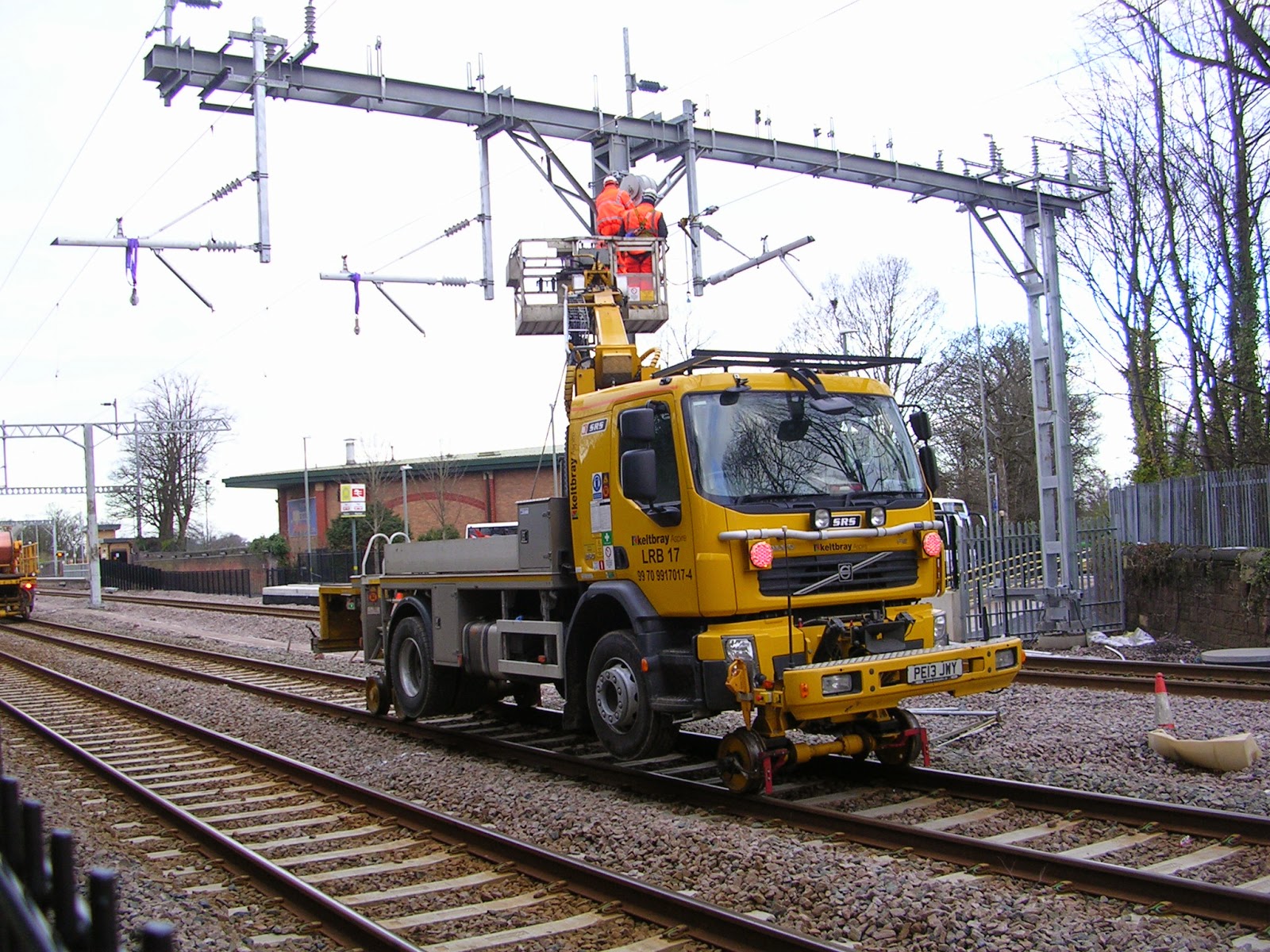 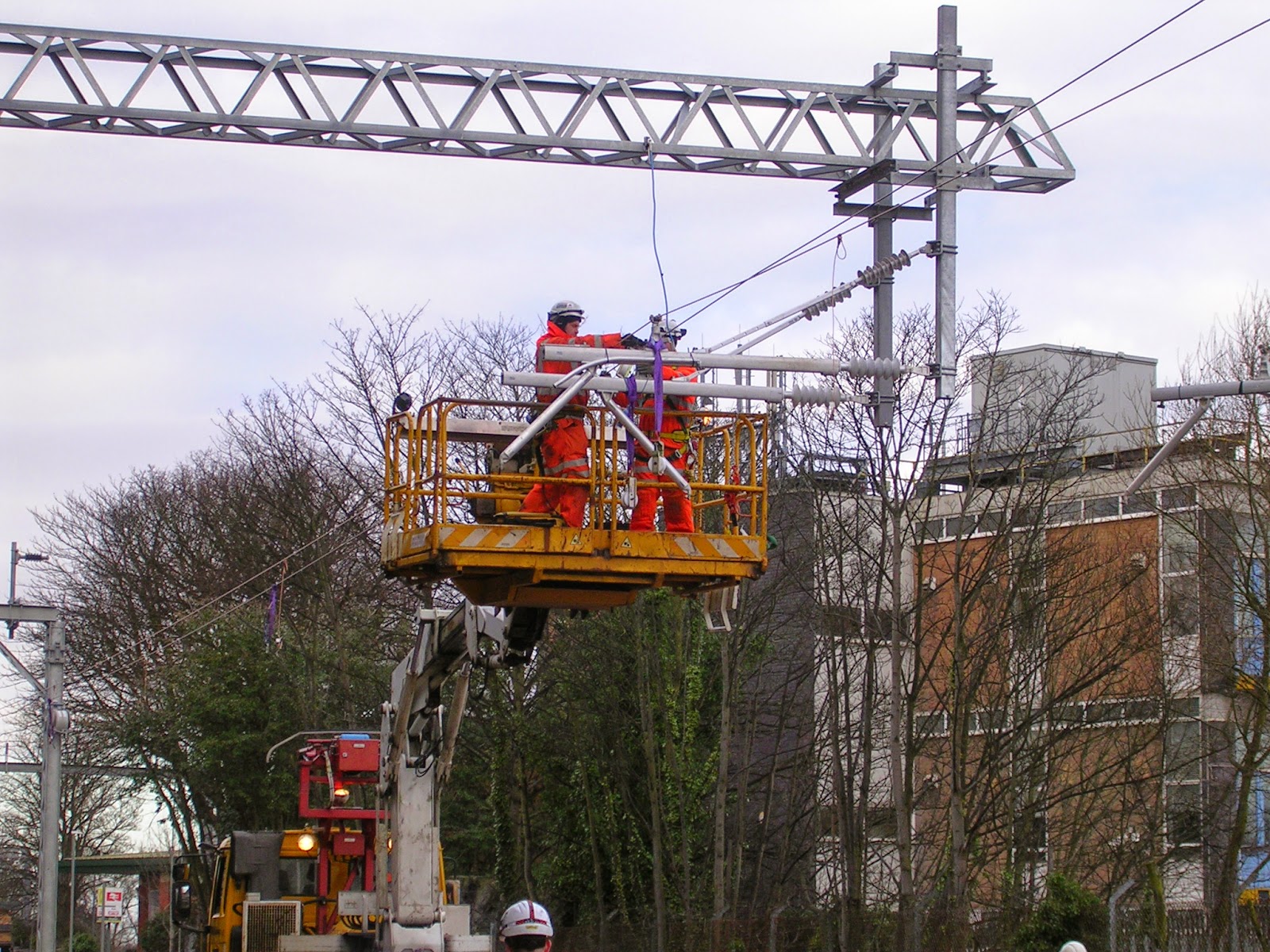 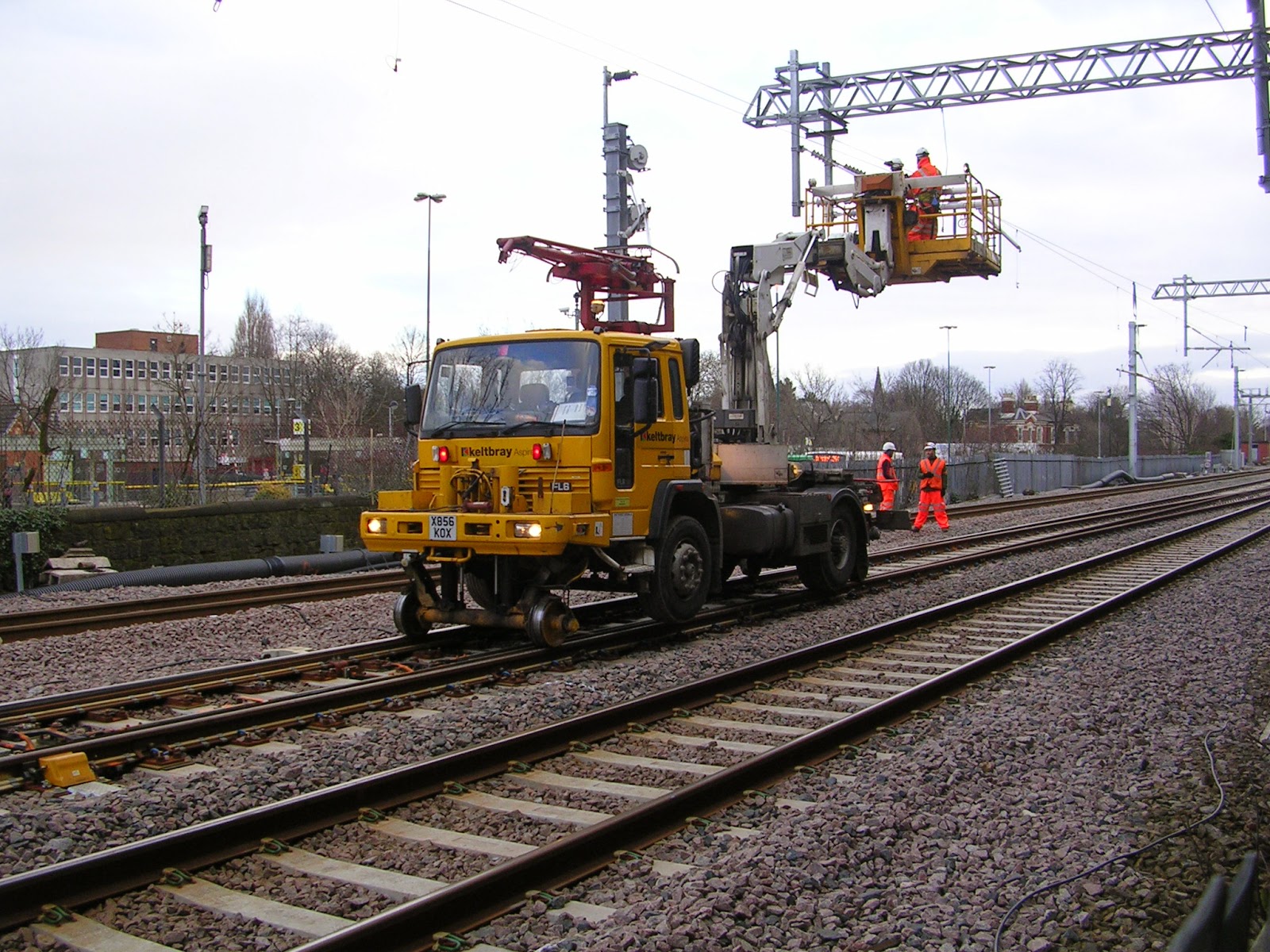 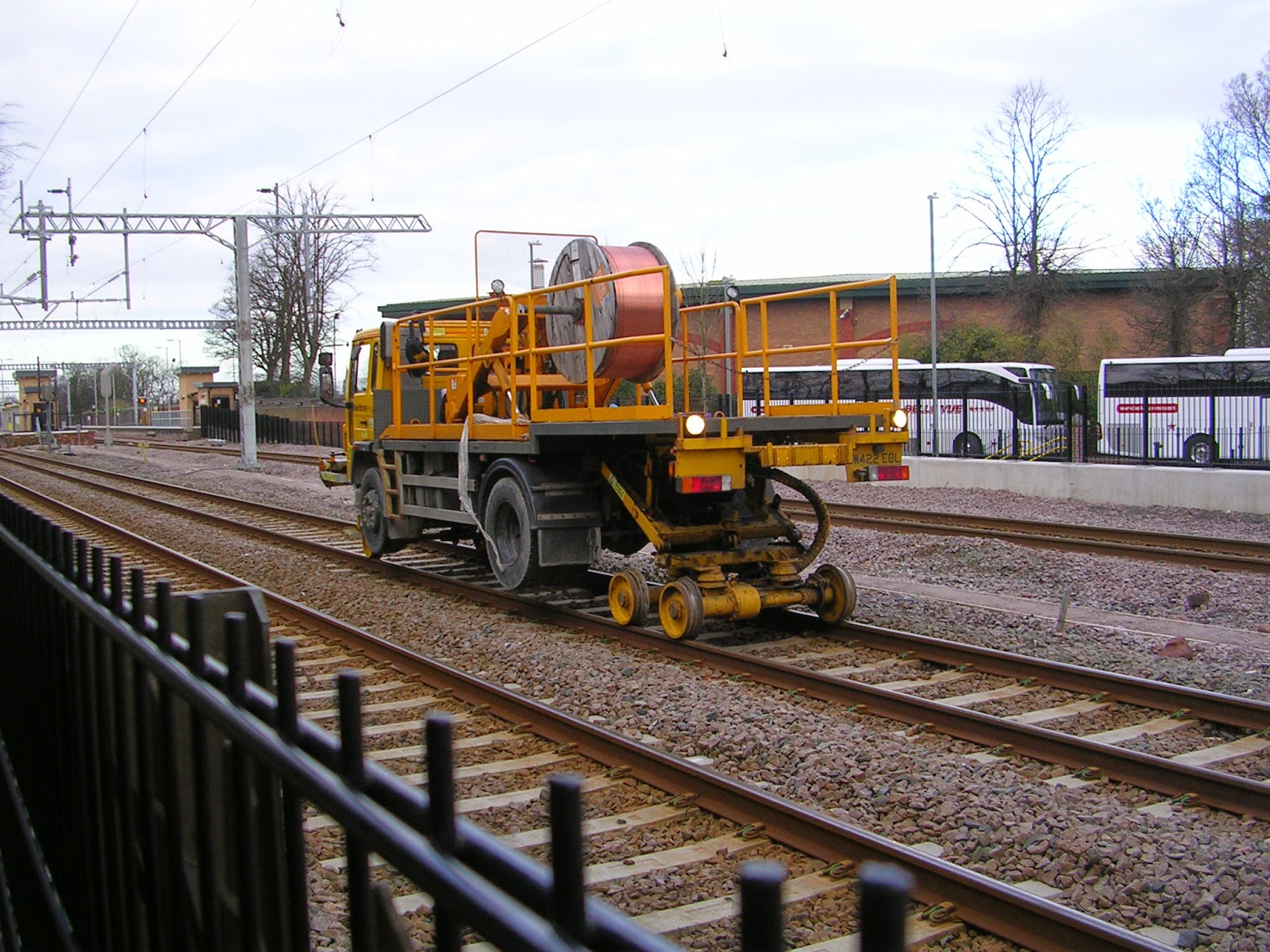 Hand-cranking the points prior to moving one of the cherrypickers: 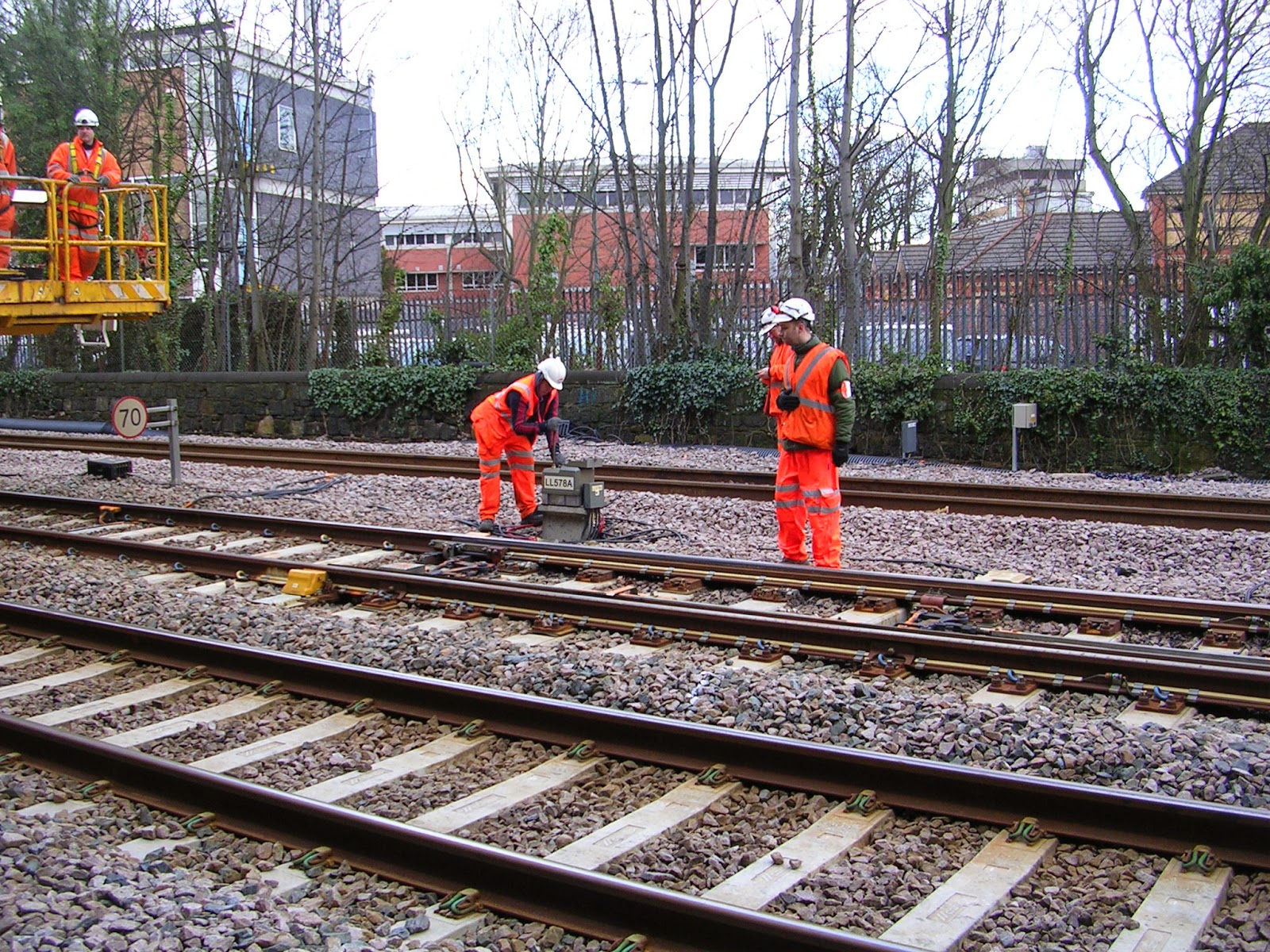 By 13:30 the down slow had gained a contact wire, suspended from the droppers and some temporary pulleys, and two cherrypickers were engaged in adjusting the positioning of the arms and wires. 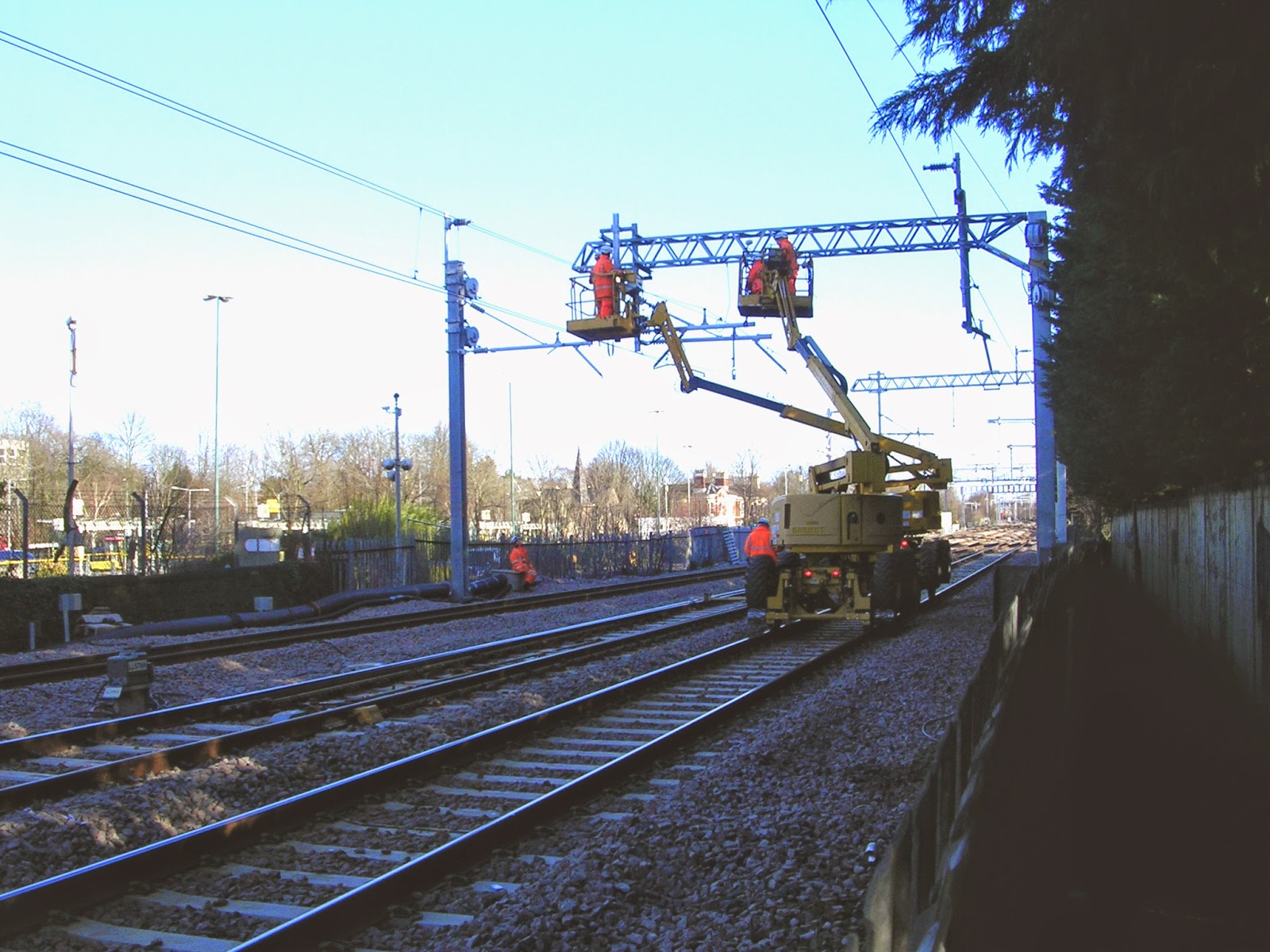 Posted by Phil Wieland at 10:12 No comments: